bballbreakdown
For more info on the BBALLBREAKDOWN Online Membership: http://bit.ly/BballMember
When Trail Blazers Coach Terry Stotts only had 9 players dressed for the game against the Golden State Warriors, it seemed reasonable to assume Damian Lillard would fill up the box score. But he absolutely destroyed it, hitting two incredibly clutch 3 pointers as well as a host of other difficult shots. Coach Nick went through the footage to explain how he generated a career high and franchise record for points in a game at 61.
SUBSCRIBE HERE FOR MORE: http://bit.ly/BBallSub
MUSIC: Fighting For Freedom by Anno Domini
ABOUT BBALLBREAKDOWN
BBallBreakdown is devoted to deep-dive analysis of NBA basketball gameplay. If you're a coach or a player, check out the MONTHLY MEMBERSHIP - filled with an ever growing library of on court demos designed to help you improve your play and your coaching! Giving fans a taste of a pro coach's film session, host Coach Nick breaks down fundamentals, play calling, offense, defense, shooting form, officiating, and everything else basketball. In addition, see exclusive interviews with NBA players and coaches, from active super stars to retired legends. 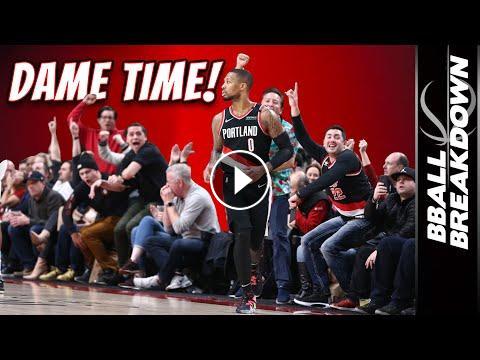 For more info on the BBALLBREAKDOWN Online Membership: http://bit.ly/BballMemberWhen Trail Blazers Coach Terry Stotts only had 9 players dressed for t...