170 Views
Sport24
Krakow, Poland, December 17, 2017 - The Zenit Kazan players were ecstatic after their win over Cucine Lube Civitanova in straight sets in the final of the 2017 FIVB Men's Club World Championship, as they filed through the Mixed Zone following the awards ceremony with the gold medals around their necks.

Wilfredo Leon, Zenit Kazan outside hitter: "The emotions tonight are really high. I never play for being the MVP, so I want to congratulate Osmany Juantorena. I'm always playing for the team, like all of my teammates. I played for the gold medal and I did my job. It's our first gold medal in this competition, so we are very happy with what we've done here."

Alexey Verbov, Zenit Kazan libero: "I have two silvers and the gold now. I don't remember the last period of my life when I was so happy like I am now. The Champions League title was great, everybody was happy, but today for us the victory was the main goal. We have won already all tournaments. This one was something out of space for us. It was always hard to play against the Brazilian champions, but yesterday we defeated them finally. For last five years the Club World Championship title was our goal, now everybody is happy and we can only think about this moment."

Giampaolo Medei, Cucine Lube Civitanova Coach: "For sure we are not happy today about the result, because I think we played at the same level as our opponents. But tonight we lost 3-0. We had some chances, especially during the first set and we didn't use them. My team wanted to play for the first place here, but I think when we sum up the whole tournament we did an amazing job in the Club World Championship. Tonight we played good volleyball against probably the best team in the world, so I am confident about the future."

Osmany Juantorena, Cucine Lube Civitanova, MVP of the tournament: "It's a pity, because I think we could have won, especially if in the first set some things would have gone differently. We missed to many chances, but Zenit played very well. I'm really happy with the MVP award, but honestly I would have prefered to be the winner tonight."

Jenia Grebennikov, Cucine Lube Civitanova libero: "I am really sad about the first set, because we truly fought with Kazan. If we would use any of the set balls we could change the flow of the game. Our game was good, but not enough to beat Russians. They are too strong and they made less mistakes. Of course it would be better to win the tournament, but in general I am satisfied of the whole week in Poland, because we played well. I hope we will play in other competitions as good as here." 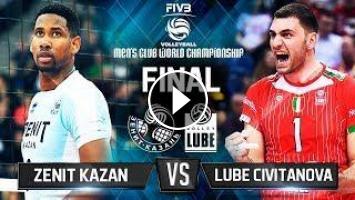 Krakow, Poland, December 17, 2017 - The Zenit Kazan players were ecstatic after their win over Cucine Lube Civitanova in straight sets in the final of...