Why 5 Substitutes Will Change The Premier League FOREVER | Explained

On today’s FD Explained, we explore how the new 5 substitutes rule will affect the Premier League!

At the end of March, the Premier League announced that it would be introducing five substitutes from the start of the 2022-23 season, following the recommendations of the International Football Association Board and a vote cast between the 20 Premier League clubs, and breaking from the three-sub rule which has stood for almost thirty years.

It also follows a trend we’ve seen across Europe since the global outbreak of covid in 2020, with La Liga, the Bundesliga, Serie A and Ligue 1 all persisting with five substitutions from the 20-21 campaign onwards. Despite using five subs following the previous season’s three-month hiatus, Premier League clubs reverted back to three after a motion to carry on with the change was defeated by 11 votes to 9.

Unsurprisingly, six of the nine to support the motion were Man City, Liverpool, Chelsea, Arsenal, Man United and Tottenham, the richest clubs in the league with the most high-quality players at their disposal, backing up the argument that an increase in substitutions disproportionately benefits the big clubs.

The issue became a point of contention between Premier League managers, with Jürgen Klopp accusing former Burnley boss Sean Dyche of putting his players’ welfare at risk by blocking the move, and arguing that for bigger clubs with more congested schedules, five subs is a necessity rather than an advantage.

Why 5 Substitutes Will Change The Premier League FOREVER | Explained 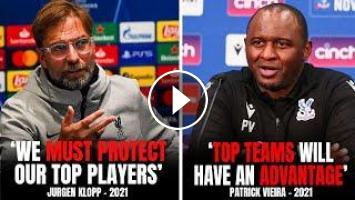 ► SPONSOR THIS VIDEO: [email protected] On today’s FD Explained, we explore how the new 5 substitutes rule will affect the Premier League! At ...