On today's Explained, we take a look at the proposed merger between the Dutch Eredivisie and Belgian Pro League, and discuss whether this could be the first of many cross-national leagues in world football!

On the 16th March, the Belgian Pro League confirmed that 25 of the country’s biggest football clubs had voted unanimously in favour of exploring the possibility of establishing the BeNeLiga, which would see the best sides from Belgium and the Netherlands come together to form a new, cross-border league.

While Dutch clubs are yet to hold such a vote, there have been discussions since 2019 between six clubs from the Eredivisie and five from the Pro League over the possible merger, and if it becomes a reality, it will hold big ramifications for football in the region and beyond. It would likely see the dissolvement of the Eredivisie, which has run since 1956, and the Pro League, which was established in 1895, bringing an end to over a century of footballing tradition in both countries – a situation many fans don’t want to see happen.

However, it also promises a higher quality, more competitive league, in doing so bringing in more money through television revenue, and with the hope that clubs like Ajax, PSV and Club Brugge will challenge more consistently in Europe, having seen their standing in continental competition decline in the decades since the establishment of the Champions League. It’s also been seen as a reaction to the looming spectre of a European Super League, and the drastic changes to the Champions League which come into effect from 2024.

But how would the BeNeLiga work? Is it really needed? And could this be the first of many cross-national leagues? Let’s find out.. 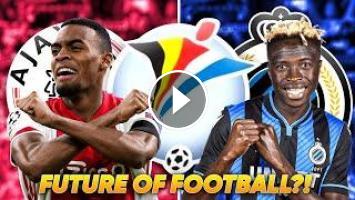 ► SUBSCRIBE to FOOTBALL DAILY: http://bit.ly/fdsubscribe On today's Explained, we take a look at the proposed merger between the Dutch Eredivisie and ...