It was practically a repeat of the previous final, when the Poles had beaten Brazil at home in four sets.

Led by an unstoppable Bartosz Kurek, Poland took the tight first set and then cruised through to the final victory in just 97 minutes.

Surprisingly, there was no game: Poland proved once again able to strip the opponents of their best weapons.

The blocking line put veteran Luiz Felipe 'Lipe' Fontelez out of the match and forced coach Renan Dal Zotto to multple setter changes - which did not pay off, for once - and a tremendous Bartosz Kurek (24 points, 69% attack, 2 aces, 2 blocks) did the rest.

Brazil's most consistent contribution in the first part of the match was offered by Wallace De Souza (14 points, 61% attacking percentage), but the explosive opposite spiker lost his offensive pace along the match, being replaced by Evandro Guerra.

The Selecao once again tried their specialty, the dramatic comeback, thanks to two big serve rounds by Evandro and Bruno Rezende, but eventually Kurek killed the match with a big attack - the right ending for a spectacular Final Six by the Polish giant.

Poland are the world champions for the third time in their history, while Brazil will have to try a new assault to their fourth title starting from 2022. 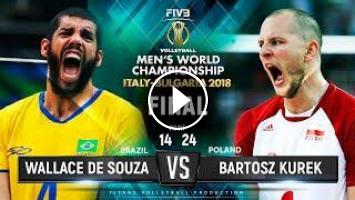