Poland captain Bartosz Kurek: “Our mentality has always been the same. We always give our 100 per cent and don’t look on our opponents. The mentality doesn’t change whether we play Japan, the United States or Tunisia. We just go out there on the court and try to win every game.”

On being the captain of the team: “Yesterday was the first day in my experience as a player that I was captain of the team. Today’s just the second day but we really miss our captain – Michal Kubiak. He will join the team later.”

Poland player Norbert Huber: “We played better than Japan in this match. In crucial moments, we played better and knew how to push hard against our opponents.”

On how they won the match: “Besides the mental aspect, we were better in service and we had good reception. This was our key to the win.”

Japan coach Yuichi Nakagaichi: "We came in with a good atmosphere after last night’s victory. Poland is not just tall, they are also skilful. They are a good team with powerful players. We lost out in rallies. Their hitting and tipping won rallies. They made clever use of the techniques. Our service did not function as well. We could have gone a notch higher. I had to think hard about the matchups for tonight because I did not know which players they would have."

Japan captain Masahiro Yanagida: "The opposition’s passing and details were better. We made mistakes. We could not score on side-out, which is important. We need to make corrections."

Japan player Tatsuya Fukuzawa: "Their service and blocks decided the outcome. The recent trend in volleyball is that the higher the level, the better the service. We could compete with them in the first and third sets.:

Japan player Yuki Ishikawa: "Their service was good. We were disrupted and could not win side-outs. In the third set our block defence worked well." 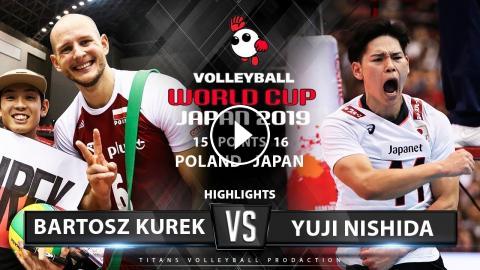