Winifer Fernandez | Is She the Most Beautiful Volleyball Player in the World !!? (HD)

Winifer María Fernández Pérez (born 6 January 1995) is a Dominican female volleyball player. With her club Mirador she competed at the 2015 FIVB Club World Championship. She became well known after a video and later some photos of her playing and training, and personal photos of her--some of them fake--went viral in July 2016.

In 2010 she won the NORCECA U18 continental championship Best Libero, Digger and Receiver awards, repeating this awards in the 2012 NORCECA U20 Championship, this time with the gold medal and the Most Valuable Player award. She also won the 2012 U23 Pan-American Cup gold medal just before debuting with the senior national team in the 2012 FIVB World Grand Prix. Fernández won the World Grand Prix Group 2, 2016 Pan-American Cup and the 2017 Bolivarian Games gold medals with her senior team. She won the 2008 Dominican Republic League bronze medal and played with the Azerbaijani clubs Telekom Baku and Rabita Baku before playing, with Mirador, in the 2015 Club World Championship.

Winifer Fernandez | Is She the Most Beautiful Volleyball Player in the World !!? (HD) 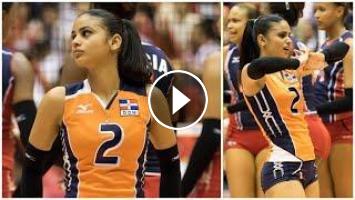