On this week’s Transfer Talk, we take a look at who Man City are lining up to replace Sergio Agüero! Erling Haaland remains their number one target, but with the Borussia Dortmund man potentially costing €180million, the Premier League leaders may have to turn elsewhere, and reports this week suggest they could put in an offer for Tottenham maestro Harry Kane! Inter Milan’s Romelu Lukaku could be another option, while Southampton’s Danny Ings remains on Pep Guardiola’s radar.

We also take a look at Mo Salah’s latest response to the rumours linking him with a move to Barcelona or Real Madrid ahead of their Champions League clash with Los Blancos, while Man United could battle Liverpool and Spurs for the signature of RB Leipzig stalwart Marcel Sabitzer. Meanwhile, Everton may launch a pursuit of Napoli star Kalidou Koulibaly, while Tiemoue Bakayoko could return to Chelsea from Naples this summer... 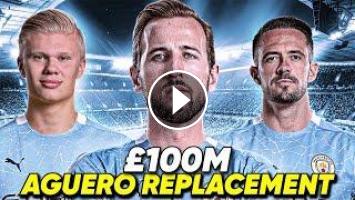 ► SUBSCRIBE to FOOTBALL DAILY: http://bit.ly/fdsubscribe On this week’s Transfer Talk, we take a look at who Man City are lining up to replace Sergio ...