180 Views
support24
All Credits by FIVB:

Mir Saeid Marouf Lakerani (Persian: میر سعید معروف لاكرانی‎, born 23 September 1985, in Urmia) is an Iranian volleyball setter. He is the captain of the Iranian national team. He was named best setter at the 2014 World League and 2008, 2012 and 2016 Olympic qualifying tournaments, as well as most valuable player at the 2013 Asian Championship. He participated in the Rio 2016 Summer Olympics. He was voted Iranian Sportsmen of the year for (2015–16) of the Iranian calendar by an Iranian TV.

National team
Marouf's first national game was for Iran boys national volleyball team in 2001 and 4 years later, he joined the Iran men's national volleyball team. In 2007, Marouf became a constant member of men's national team but due to conflicts and disagreements, Marouf decided not to continue playing for men's national team in 2011 but he ultimately returned to team in 2012 and since former captain Alireza Nadi was not invited to the team by then-head coach Julio Velasco, Marouf became the team captain ever since. Marouf In the 2013 Asian Men's Volleyball Championship was selected as the Most valuable player. He was introduced as the Best setter in at 2014 FIVB World League above Bruno Rezende and Dragan Travica. 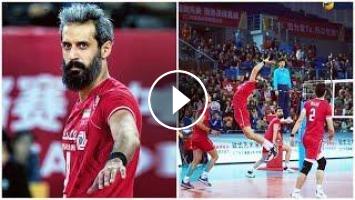