39 Views
support24
DON'T Mess With Yuji Nishida | HERE'S WHY !!! Yuji Nishida (西田 有志, Nishida Yūji, born 30 January 2000) is a Japanese male volleyball player. Currently, he plays for Volley Callipo in Italian Volleyball League. Nishida made his debut with JTEKT Stings at V.League on 6 January 2018 in a match against Osaka Blazers Sakai. His impressive debut at the young age of 17 soon earned him a position in JTEKT's Starting 6, as well as Japan men's national volleyball team. Nishida was also led the team finishing 7th place after 29 years, in the 2020 Tokyo Olympics.

He is one of the youngest players in the 2018 roster of the Japan men's national volleyball team and FIVB cup Final. He made his first international performance with the Japanese national team in 2018 FIVB Volleyball Men's Nations League. In June 2018, he played a pivotal role in securing Japan's first win in 11 years against Italy where he collected 24 points from 21 spikes and 3 aces. In September 2018, in a match against Argentina in 2018 FIVB Volleyball Men's World Championship, Nishida became the youngest player ever to score 30 points in a match.[9] In June 2019, Nishida broke serving records in the VNL history after hitting 7 aces in a single game during a match against Canada.

On November 3, his club had a schedule to face with Power Volley Milano, which he would competed against Yūki Ishikawa, his compatriot. It marked the first time that the Japanese player competed against each other in Italian league. On November 14, in the match against Consar RCM Ravenna, Nishida led the team won over Revenna 3–0 and that made him became the top scorer and MVP of the match.

On November 22, in the match against Volley Lube, he injured his left calf at the early of second set, which took him out of the court. As a result, he was unable to participate in the next game against BluVolley Verona. 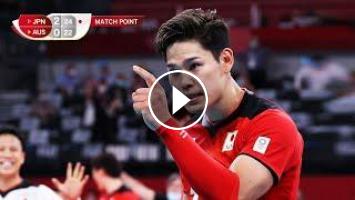