149 Views
Sport24
QUINTON DE KOCK struck the second highest ever score by a South African as the Standard Bank Proteas scored a crushing six-wicket victory over Australia in the first Momentum One-Day International (ODI) played at SuperSport Park on Friday. The young opener blasted 178 from 113 deliveries, clubbing 11 sixes and 16 fours along the way, to help the hosts secure a famous win over Australia. Set 295 for victory, they almost made a mockery of the target by breezing past it with almost 14 overs to spare to take a 1-0 lead in the five-match series. De Kock’s blitz was second only to that of Gary Kirsten’s unbeaten 188 scored against United Arab Emirates in Rawalpindi during the 1996 World Cup. The 23-year-old was not the only shining light for South Africa, with Andile Phehlukwayo showing signs of a potential new star being born with his splendid return of 4/44 on a day when every other bowler, bar Imran Tahir (1/46), travelled. Phehlukwayo, still only 20, made a low-key debut against Ireland five days ago and was given another go at Centurion where he did not disappoint. After Faf du Plessis won the toss and opted to bowl first, new-ball pair Kagiso Rabada (0/63), who had a rare off day, and Dale Steyn (1/65) struggled to contain David Warner (40) and Aaron Finch (33). Wayne Parnell (1/56) and Phehlukwayo were introduced to try and stem the flow, and after the former dismissed Warner, the latter accounted for Finch, captain Steven Smith (8) and Mitchell Marsh (31) for a first spell return of 3/34 in six overs. He returned to remove John Hastings for a career-best 51 (56 balls, 6 fours, 2 sixes) later on as Australia’s loss of regular wickets cost them. They had to rely on George Bailey to hold things together with a top-score of 74 (90 balls, 7 fours, 2 sixes) as South Africa looked confident at the halfway stage. And they came out firing after supper as De Kock and Rilee Rossouw plundered 145 for the first wicket in a mere 17.1 overs.
Rossouw, standing in for the ill Hashim Amla, smashed 63 off 45 balls (10 fours, 1 six), before Faf du Plessis (26) helped De Kock add 123 in 14.3 overs for the second wicket to take their team to the brink of victory. Both fell quickly along with JP Duminy (9) to make the margin of victory slightly shorter, but it did not prevent the Proteas from securing one of their great wins over Australia. 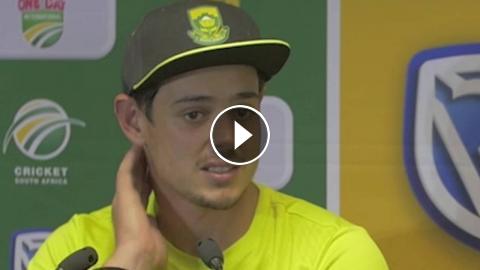 QUINTON DE KOCK struck the second highest ever score by a South African as the Standard Bank Proteas scored a crushing six-wicket victory over Austral...