support24
Cai Yun and Fu Haifeng achieved unprecedented success becoming the only men’s doubles pair to win four BWF World Championships. With his front-court play ably assisting the powerful Fu, Cai piloted the pair to Olympic silver at Beijing 2008 and gold at London 2012, as well as Asian Games team gold in 2006 and 2010. They also contributed a major part to China’s dominance over a decade in the Thomas Cup and Sudirman Cup competitions. Following Cai’s retirement, the left-handed Fu then partnered Zhang Nan to claim a second successive Olympic gold at Rio 2016.

BWF TV is the official channel of the Badminton World Federation (BWF), where we bring to you live, catch-up and delayed streaming of the big events on the HSBC BWF World Tour, as well as the majors like the TOTAL BWF Thomas and Uber Cup Finals and the TOTAL BWF World Championships. Plus enjoy a range of other exclusive content including the latest highlights and interviews as well as our top-rating magazine show Badminton Unlimited. 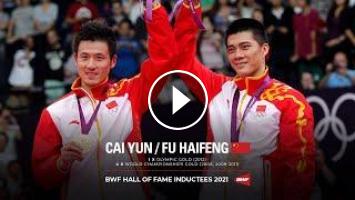