support24
Playing in the midst of a pandemic, Northeastern University goaltender Aerin Frankel and her teammates finished the year making history at the program’s first Frozen Four. For Frankel, she was simply grateful to play.

Frankel was named the 2021 Bob Allen Women’s Player of the Year, an award that annually recognizes the accomplishments of an outstanding women’s hockey player from the United States. It’s named in honor of the late Allen, an ardent supporter of women’s hockey in his career. Frankel said she is honored to receive the award.

In addition to this award, Frankel won the 2021 Patty Kazmaier Memorial Award, which goes to the top women’s college hockey player. She was also the Hockey East Player of the Year, WHCA National Goalie of the Year and Hockey East Goaltender of the Year.

Frankel finished her fourth season in between the pipes for the Northeastern Huskies, leading her team to its first-ever Frozen Four appearance and national title game. Northeastern took a 22-game unbeaten streak into the national championship game as the No. 1 seed but fell 2-1 in overtime to Wisconsin and finished the season 22-2-1. Frankel made 81 saves in three NCAA Tournament games, with 35 in the championship game. 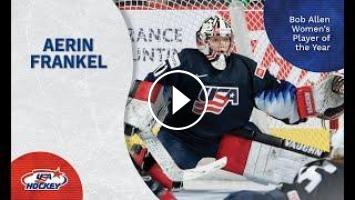 Playing in the midst of a pandemic, Northeastern University goaltender Aerin Frankel and her teammates finished the year making history at the program...