10 Footballers Who Lost It All!

In this top ten, we have a list of players who were once at the top of their game, before it all came crashing down. It starts with Eric Djemba-Djemba who had more outgoings than incomings despite a £20K weekly wage, whilst others like Keith Gillespie and Kenny Sansom lost their money gambling - although in Sansom’s case, there was also issues with alcohol. West Ham’s former record signing Savio Nsereko faked his own kidnapping to extort money from his own family, and Johan Cruyff had to return to football after he lost his fortune investing in a pig farm. Emmanuel Eboue lost most of what he owned in a messy divorce, the effects of which he is still feeling, and former Man Utd goalkeeper Mark Bosnich never played in England again after a positive drugs test. Then there’s the ones that went to prison - Plymouth goalkeeper Luke McCormick killed someone drink-driving, and Brazilian goalkeeper Bruno was involved in a plot that resulted in the murder of his ex-girlfriend. Then of course, there’s Ronaldinho, a former Ballon D’Or winner turned illegal immigrant, put in prison for crossing borders without his passport. Enjoy!

10 Footballers Who Lost It All! 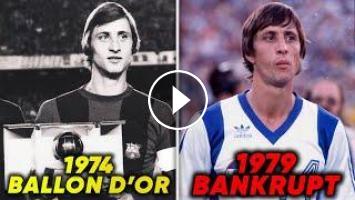 ► SUBSCRIBE to FOOTBALL DAILY: http://bit.ly/fdsubscribe In this top ten, we have a list of players who were once at the top of their game, before it ...