Their victory takes Russia into the final of this year’s VNL where coach Tuomas Sammelvuo’s men will attempt to do as well as in 2018 when they defeated hosts France in Lille to win gold in the competition’s inaugural edition.

Russia claimed a three-set win against France in their first match in the Finals on Thursday, before losing to USA on Friday and finishing second in Pool A. Their opponents Poland were victorious in their two pool stage matches, first defeating Olympic champions Brazil in five sets, then beating Iran in four.

Head-to-Head
- Poland and Russia (including predecessors) will meet for the 53rd time in world level major tournaments (World Championship, World League, Olympic Games, Grand Champions Cup, World Cup and Volleyball Nations League). Poland lead the head-to-head 34 to 18.
- Since the start of 2016, Poland and Russia have played each other seven times in world level major tournaments, with Russia winning six of those seven recent encounters. Before these seven matches, Poland had won six consecutive matches against Russia (2014 to 2015).
- The last three world level meetings between Poland and Russia took place in the VNL. They met twice in 2018, when Poland won 3-0 in the preliminary round and Russia 3-1 in the final round.
- Earlier in the 2019 tournament, Russia beat Poland 3-1 in the preliminary round on 14 June. Viktor Poletaev (Russia) was top scorer in that match with 18 points.
- Russia and Poland have met once before in the semi-finals of a world level major tournament. In the 2011 World League, Russia won 3-1 and eventually won the tournament by beating Brazil 3-2 in the final.

Poland
- Poland won both final round matches to advance to the Volleyball Nations League semi-finals, 3-2 against Brazil and 3-1 against Iran.
- In the 2018 VNL, Poland also reached the final round, but lost both of their matches at that stage and did not advance to the semi-finals.
- Poland have won nine VNL matches in a row. They could win 10 straight world level major tournament matches for the first time since the first 10 matches of the 2015 World Cup.
- In the 3-1 victory over Iran, Bartosz Bednorz was top scorer in the match on 24 points. He scored multiple points from attacks (20), blocks (2) and aces (2).
- Poland's 2019 VNL top scorer is Maciej Muzaj with 127 points. Bartosz Kwolek (121) and Aleksander Sliwka (118) are next up.

Russia
- Russia claimed a semi-final spot in the 2019 Volleyball Nations League after beating France 3-0 and falling to United States by the same scoreline.
- Russia are still on course to claim their second VNL gold, after beating France 3-0 in the final of the inaugural edition in 2018. Russia also won the first two Olympic gold medals in men's volleyball (as URS in 1964, 1968) and the first two world championships (as URS in 1949, 1952).
- Russia come off a 3-0 defeat against United States. They have never lost back-to-back VNL matches.
- Six of Russia's last seven VNL matches have ended in straight sets (4 wins, 2 defeats). The only exception was their 3-2 win over Argentina in the last weekend of the preliminary round.
- Ilyas Kurkaev (0.50) is one of only three players with at least 0.50 stuff blocks per set in the 2019 VNL, alongside Canada's Graham Vigrass and Iran's Seyed Mohammad Mousavi Eraghi (both 0.52).
- Only Japan's Yuji Nishida (23) has scored more points from serves in the 2019 VNL than Egor Kliuka (21).
- On 10 points, Fedor Voronkov was Russia's top scorer in the 3-0 defeat against United States. 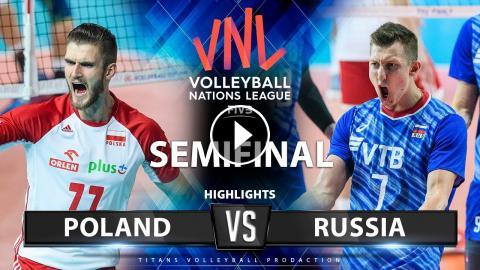