Brazil coach Renan Dal Zotto: “I am happy that we were able to secure the World Cup title on the penultimate day of the competition. At the press conference before the start of the tournament I said that this World Cup is a very important competition for Brazil. It’s one year before the Olympics so we have already had the qualifying tournament, but this World Cup is also important for Brazil. There is only one day remaining in this competition, but I would like to praise the hard work of my players. Day in day out they have faced tough matches, and I’d also like to thank them for their contributions to the Brazilian team. And of course I’d like to praise the Japanese team as well, because their level has been improving a lot recently. In this competition, too, they suffered only three defeats, against Brazil, the United States, and Poland, which shows that the level of the Japan team has been improving a lot.”

Brazil captain Bruno Rezende: “We are really happy because this was our goal at the beginning of the competition. We worked so hard for months for this tournament. And when you achieve your goal it brings a lot of joy to the team. We knew that the Japanese team were improving a lot in recent years, and they are having a really good tournament. They had a powerful serve, it was so difficult because they had great servers and they put us in trouble in the second and the fourth sets. I think they have a really great defence, and sometimes in the second set we lost our mind a little bit because they were defending a lot and making a lot of counter attacks and we didn’t have the patience to continue to play and committed some mistakes. After that I think we made a great job on the serve in the third set, and then the fourth set was close like we expected before the game. That’s it and now we are the champions, and tomorrow we have to do another great job because we want to be undefeated in this competition.”

Japan coach Yuichi Nakagaichi: “We were playing the champions, who have also been very stable in this competition, but even so we were able to reach where we reached. I don’t know if it’s a given or if it’s extraordinary and worthy of praise, but I think my players did well - if I am able to blow my own trumpet. Of course we lost some sets, but starting with service we were able to show some tenacious defence and I think I can say that we put some pressure on them. The side attackers’ scoring ratios could have been higher and then we might have been able to win one more set, or possibly the match. But, everything considered, I think I can say we did well. I also think (captain Masahiro) Yanagida did very well coming into the match, and (Akihiro) Yamauchi’s blocking was good - I think it was a total of six stops - so if he can do that against Brazil then we can safely say the defence did quite well and is worthy of high evaluation.”

On winning a set against Brazil for the first time in 12 years: “To be honest with you, I’m not sure what to make of that. Rather than thinking of winning the first set in a while, I think the bigger thing is that we were able to win one set and then compete closely until the end.”

Japan captain Masahiro Yanagida: “Today their service gave us some tough times, but on the other hand our service was effective at times too, so I think we played as we should against Brazil. But during the times when our service wasn’t effective we allowed them to attack as they wished and our blocking wasn’t very effective. To some extent we have to have a sense of resignation about what Brazil could do, and when we play other stronger countries we have to accept that similar situations will happen. Tomorrow is the final match of the competition, and we’d like to fight as one for a great ending.” 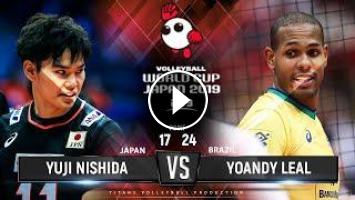