support24
We’ve got some huge news from WWE, as the company has released several Superstars from their contracts.
So far, Samoa Joe, Billie Kay, Peyton Royce, Bo Dallas, Tucker, Mickie James, Kalisto, Wesley Blake, and Chelsea Green have all been cut, and WWE issued a short statement, wishing them all the best in their future endeavours.
It’s especially surprising to see Joe and Kay cut, as both were featured at WrestleMania, with Kay making the card unlike her IIconics partner.
Joe’s recent removal from RAW’s commentary team had fueled rumours of an in-ring return, but if that happens, it’ll now be outside WWE.
Mickie James’ last appeared on the NXT TakeOver Stand and Deliver kick-off show, and served as a commentator for one match, but hasn’t wrestled in over half a year.
Chelsea Green’s cut is also surprising, as she recently signed a three-year deal with WWE, and going by recent photos of herself backstage at SmackDown, it looked like she was ready to come back, following reports that she’d been medically cleared.
Bo Dallas’ last WWE appearance was back at Crown Jewel 2019, and though he’s been showing up to WWE events recently, and rumours have circulated of him being part of the storyline featuring his real-life brother Bray Wyatt, WWE’s creative has had nothing for him.
Despite record-setting profits, these releases, like the April 15th 2020 releases, were explained to the releases as due to budget cuts in phone calls made by John Lauriniatis, and we can only imagine that WWE Superstars will think twice before picking up the phone on April 15th in the years to come. 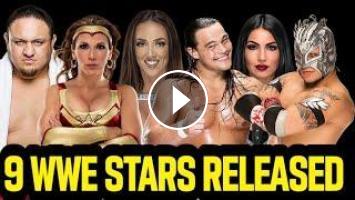 We’ve got some huge news from WWE, as the company has released several Superstars from their contracts. So far, Samoa Joe, Billie Kay, Peyton Royce, B...