Gdansk, Poland, August 10, 2019 - On the second day of Pool D FIVB Volleyball Olympic Qualification Poland faced France, who were expected to be their hardest rival in the tournament. The hosts surprized their public by winning decively in three sets (25-21, 25-19, 25-20) and are not far from earning themselves a place in Tokyo Olympics.

Benjamin Toniutti (France captain): "It was a tough game, but Gdańsk, Poland, August 10, 2019 - Poland deserved this win as they were much better. We didn't find a solution to beat them. They are really strong, but also we struggled with some problems in spike. It was difficult. We wanted to get a ticket for Tokyo 2020 at this tournament, but now we lost three-zero and in my opinion there is no chance for it anymore. We have to fight for the Olympics in January."

Laurent Tillie (France head coach): "Poland played better in all elements - serve, block, defence, attack - so it was difficult for us. We lost to a better team. We had many problems with service and Poland played very well tactically. We were not relaxed enough to perform better."

Vital Heynen (Poland head coach): "It was the best game of my team this season. The match against Brazil in Chicago was also great, but it's a totally different situation. Today we had some pressure on the team, and my guys showed that they are handling this pressure amazingly. But it's only one match and we are not qualified yet. I think that this whole 'package' was too much for France. They had to play two tough matches in a row, they played against the public and a few other elements were our advantage, and we used this. During the world championship we showed that we are one of the best blocking teams and today we proved that again. My MVP of the match is the public, the Polish fans. What an amazing place to play, what a support - Polish fans are the best!

Michał Kubiak (Poland captain): "We all played a very good match, of course we made some mistakes, but during games like this, playing against France with big risk, some mistakes must happen. Volleyball is a game of errors, we made only a few. We played well and calmly. It's hard to compare one game to another, but when it's about the encounter which decides whether you go to the Olympics or not, it triggers extra emotions. We still don't have the qualification, we have to win one more game, so we are focused on playing well tomorrow." 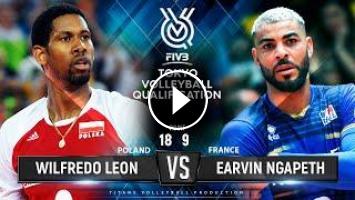