389 Views
admin
Wilfredo León Venero (born 31 July 1993) is a Cuban-born Polish professional volleyball player, a member of Cuba men's national volleyball team in 2007–2012 and current member of Poland men's national volleyball team and Italian club Sir Sicoma Conad Perugia, silver medalist of the World Championship 2010, NORCECA Champion (2009, 2011), Cuban Champion (2009, 2010, 2011), Russian Champion (2015, 2016, 2017). Considered by many as one of a kind he led Cuba to the silver medal at the world championship 2010 in Italy, alongside Yoandi Leal and Robertlandy Simon considered one of the leaders of the "Generation of Miracle" of Cuba volleyball and by many expert, Leon may be the best player of all time considering all of the accomplishments he has made while still so young, having won every single title at pro level at the age of 24.

Personal life
He was born in Santiago de Cuba, Cuba. He is Wilfredo León Hechavarría and Alina Venero Boza (a former volleyball player)'s son. He studied at Escuela Nacional del Voleibol Cubano. León Venero lived in Poland for a while with his Polish girlfriend. On July 14, 2015 he received Polish citizenship and expressed his desire to play in the Poland men's national volleyball team. On June 24, 2016 he married Małgorzata (née Gronkowska). On May 13, 2017 their daughter Natalia was born.

Career
He started to play when he was 7. His first coach was his mother Alina. Wilfredo León Venero debuted in the Cuban national team on May 24, 2008 in Düsseldorf, aged 14 years and 10 months. He won the title of Best Receiver at World League 2009. On July 31, 2009 as the youngest player of tournament,[citation needed] he won a silver medal in the World U21 Championship 2009 (after losing the final against Brazil). In 2009, the Cuban national team, with Leon, won the title of NORCECA Champion (and three individual awards) and repeated this success in 2011. After losing the final against Brazil, Cuba won a silver medal at the World Championship 2010. He was the youngest captain of the national team (he was 17). In 2012, he won bronze medal of World League - Sofia 2012. In 2013, Yoandri Díaz and León fled Cuba to play in a club outside of their homeland.They lost the possibility of playing for the Cuba national team.

On July 24, 2019 he became fully eligible to play for the Poland national team. 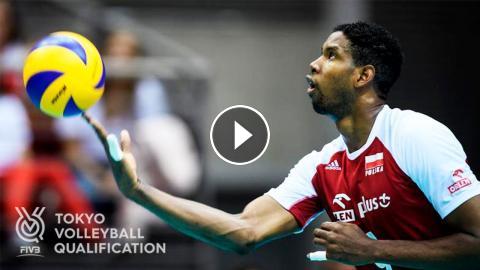