support24
The VW Scirocco Silhouette Vortex GC10 of Team Vortex V8 is a racing car made by the French manufacturer Global Concept Automobile. It's a prototype with the VW Scirocco shape because it differs enormously from the base car, starting from the engine positioned in the central/rear part. It's a Nissan 3.5-Litre V6 unit that equips the 350Z and is available in two power steps, 320hp and 430hp. There's also the possibility of installing a 540hp Chevrolet V8 LS3 engine. As we said, forget the basic Vw Scirocco, only the bodywork recalls that model, but it is made of fibreglass to contain the weight. We also find a tubular chassis, a Sadev sequential gearbox with steering wheel pads and a Brembo brake system with 4-piston calipers and discs, both front and rear, from 330mm. The weight is very low, about 1.000Kg as well as the price, starting from 70.000 Euro to get to 120.000 Euro of the most powerful versions. This car was filmed at the Mugello circuit during the 2019 12h Mugello edition which is part of the 24H Series races organized worldwide by Creventic.
I have to thank my friend and Youtuber 19Bozzy92 (https://www.youtube.com/user/19Bozzy92) with whom I collaborated to realize this video. Enjoy! 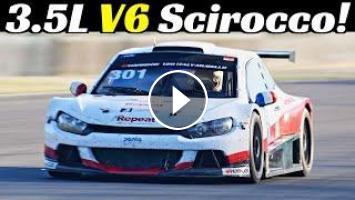 The VW Scirocco Silhouette Vortex GC10 of Team Vortex V8 is a racing car made by the French manufacturer Global Concept Automobile. It's a prototype w...