In 2007, Wallace won the U20 World Championship with Brazil’s national team. Playing for VôleiFuturo (SP), was considered one of the best players of Superliga 08/09 and was elected the best server. The good performances took him to Sada Cruzeiro (MG). Right after, in 2010, he won the World League title. In 2011, gold medal in Pan American Games and finished the season with the World Cup bronze medal. In London 2012, Wallace won the silver medal with Brazil and collaborated to the silver medal in 2013 World League and the title of South American Championship. Still in 2013, Wallace became champion of the Grand Champions Cup and was elected the best opposite spiker of the competition. With the Brazilian team, Wallace
achieved the silver medal in the 2014 FIVB World League and was elected the best opposite spiker in the tournament.
He also repeated the good performance in the campaign of the silver medal in the FIVB World Championship in Poland. In 2015, Wallace had a surgery in his back that put him out of the national team during entire season. However the player comeback stronger in 2016 and was a key factor in the Olympic Games and in the silver medal campaign in the FIVB World League. 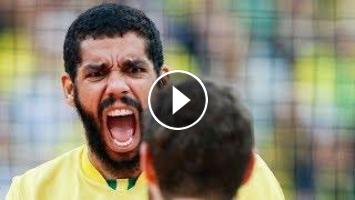