support24
Intro 0:00
AJ Styles reveals he tested positive 0:26
Full schedule of WWE pay-per-views for the rest of the year 1:16
Roman Reigns to not compete in Hell in a Cell 2:02
The Miz wants to face Roman Reigns at WrestleMania 37 2:42
NXT hits big numbers for their Tuesday event without AEW 3:12
WWE considering moving NXT away from Wednesdays 3:50
Brodie Lee talks about Brock Lesnar joining AEW 4:26
Paul Heyman talks about his alliance with Roman Reigns 5:50
Drew McIntyre’s opponent for WWE Survivor Series revealed 6:35
Ric Flair says that Roman Reigns might not be a heel yet 7:15
AJ Styles reacts to Paul Heyman being on SmackDown 8:07

AEW Dynamite is now in the books with AEW putting on yet another show without having to compete with NXT, who had their show on Tuesday instead. With reports of multiple wrestlers testing positive for the virus, Brodie Lee talking about Brock Lesnar possibly making the jump from WWE to AEW, and Drew McIntyre’s plans for WWE Survivor Series possibly revealed, there’s a lot to talk about at the moment.
With that in mind, this is Wrestling Hub and you are watching the Wrestling Report for the 3rd of September. 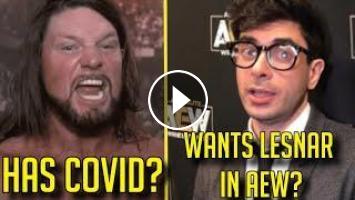 Intro 0:00 AJ Styles reveals he tested positive 0:26 Full schedule of WWE pay-per-views for the rest of the year 1:16 Roman Reigns to not compete in H...