This is One of the Most Dramatic Matches in Volleyball History !!!

Outside of the arena, located in the heart on the city of Katowice, around 15,000 followed the action showed on several giant screens.

The victory of the home team put an end to the string of three consecutive titles won by Brazil starting in 2002 in Buenos Aires and continuing in 2006 in Japan and 2010 in Italy.

It was the second gold medal attained by Poland in the history of the event which was inaugurated in 1949, with the previous one accomplished forty years ago when competition took place in Mexico in 1974.

Poland also claimed the silver medal in 2006 when the quadrennial tournament was held in Japan. They lost 3-0 the final encounter with Brazil.

It was the second defeat of Brazil during the competition both at the hands of Poland with the previous one a 3-2 decision on September 16 during the third round. Poland's only loss in the event was in the second round against United States by 3-1 score.

Mateusz Mika led the victory with 22 points, followed by the consistent Mariusz Wlazly who contributed 14 points. Michal Winiarski and Piotr Nowakowski chipped in with 13 and 10, respectively.

Due to their powerful serves, Brazil extended the distance to five points (13-8) and forced Stephane Antiga to call a timeout. Controlling the game, Brazil with the efficient block by Wallace and Lucas increased the distance to 18-11 ahead, putting big pressure on the host team. Going confidently to the late part of the set, Brazil finished it 25-18.
When Bruno came at the serve line, Brazil started to catch up and did it effectively, as the scoreboards showed 17-17. From that moment, game continued on a point-by-point basis and they were Poland who managed to keep patience and finished the second set 25-22.

The emotions that fulfilled Spodek Hall in the previous set were definitely taken to the third one as it was very balanced and tough as the gold medal match should be. With Winiarski and Wlazly on Poland’s wings against Wallace and Lucarelli of Brazil, the game was battled point-by-point and at 15-15 Wlazly’s kill put Poland 16-15 ahead. After a fine Wlazly’s block on Vissotto, at 18-16 Bernardo Rezende decided to call timeout. Vissotto’s and Lucarelli’s spikes followed by Wlazly’s mistake helped Brazil witch catching up at 23-23, but finally Poland won the third set 25-23 after Brazil’s attacking error.

It was a well balanced game during the beginning of the fourth set a result of great passing by both teams while displaying powerful serves almost all the time. At 5-5, Winiarski’s left-wing kill put the hosts one point ahead. Mateusz Mika’s mistake was followed by his fine spike that sent Poland to the lead at the first technical timeout. Their advantage grew to two points (11-9), however, two simple mistakes caused an even 11-11 and forced Poland’s coach to stop the winning streak of Brazil by calling a timeout. This short break helped the host team as they managed to jump 15-13 ahead after Mateusz Mika’s fine dink. After the second technical timeout, Brazil run away for two points (19-17), after a fine block of Lucas and Lucarelli. Poland with Michal Winiarski’s kill caught up at 21-21 and won the gold medal after the 25-22 score in the fourth set.

This is One of the Most Dramatic Matches in Volleyball History !!! 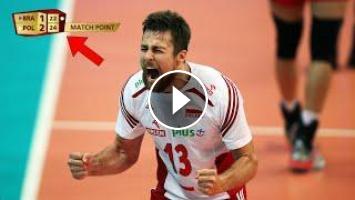