The Most Creative Volleyball Actions by Simone Giannelli (HD)

Career
He had proved himself an up-and-coming star within volleyball, by achieving the Finals MVP award at the 2014-2015 Italian Volleyball League won by his team against Modena Volley. He then followed the trend up by taking the starting 7 in the national team, despite competition by players like Dragan Travica, Michele Baranowicz and Marco Falaschi.

In his first year in the national team he won a silver medal at the 2015 FIVB Volleyball Men's World Cup and a bronze medal at the 2015 Men's European Volleyball Championship, where he was also awarded the prize for best setter, the youngest in the history of the tournament.

The Most Creative Volleyball Actions by Simone Giannelli (HD) 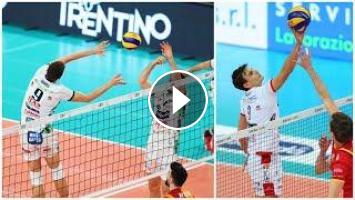