362 Views
Sport24
Yes, you read the title correctly: 1911 and 28.4-litre engine. If it's your first time you hear about this car I suggest you to take a few seconds to read a bit of history right here below.

Back in prewar period there was the thought that "bigger displacement is best", in terms of performance and top speed. In fact during those years one of the most significant automotive competition was land speed record which has characterized the emergence of four-wheeled monsters such as the 1905 Darracq 200HP, Fiat Mephistopheles or the Blitzen Benz, that was the fastest veichle and record holder.
The Fiat S76 or Fiat 300HP Record was a car built on purpose to destroy the supremacy of the Blitzen. To do that Fiat decided to put a 28.4-litre 4-cylinder engine (which is still the largest car engine ever produced) that was able to output almost 300hp at 1,900 rpm and push the 1,650 kilo / 3,638 lbs car at a max speed of 290 km/h.

The Fiat S76 tried to set records in various locations starting from the circuit of Brooklands where it reached the 200 km/h mark, and at Saltburn beach with the same speed. It was then raced in Belgium on a straight at Ostende where it managed to reach 225 km/h but record couldn't be made official due the "two run" rule (which requires the car to have a go in each direction then calculate the average) and the S76 failed the return run. In 1912 it reached the incredible 290 km/h mark at Long Island.

Only two chassis where made of this monster. After all this attemps one was sold and disapperead and the other was disassembled by Fiat to avoid anyone from the competition purloining its secret. But more than 10 years ago English collector Duncan Pittaway was able to trace and find the engine of one (smantelled one) and what he believes is the chassis of the other plus other spare parts. After a hard work of restoration and reconstruction the car was finally finished and ready to be driven in 2015.

Watch the car in action during the 2017 Goodwood Festival of Speed!

Link To My Channel: http://www.youtube.com/user/19Bozzy92 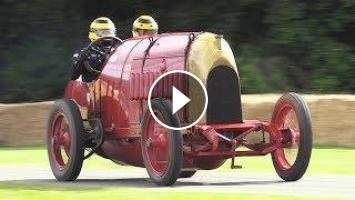 Yes, you read the title correctly: 1911 and 28.4-litre engine. If it's your first time you hear about this car I suggest you to take a few seconds to ...