242 Views
admin
Bari, Italy, September 12, 2018 - The much-anticipated matchup starring Russia and Australia lived up to all expectations with the Russian side able to storm to a comprehensive 3-0 (25-21, 25-20, 25-16) victory at PalaFlorio in Bari. The impressive middle blocker Dmitriy Muserskiy and opposite Maxim Mikhaylov were pivotal to Russia’s victory as they recorded 13 and 17 points, respectively. Their teammates Dmitry Volkov and Artem Volvich scored 10 and 9 points to add to Russia’s tally. Australia put up a fight in the first two sets, with opposite Paul Carroll registering 13 points to his name.

In the second match of Pool C, the Volleyroos around coach Mark Lebedew tried to stand the challenge against the powerful machine of Russia, who won the inaugural VNL earlier this summer and gold at last year’s European Championship as well.

From the very beginning, it was a close fight and a thrilling game with the favourites from Russia trying to disrupt the Australian rhythm and eventually moving to the front to complete their winning run at 25-21.

Until the first half of the second set, the course of the game did not change much, with both sides delivering exciting actions. Two stunning aces contributed three set points for Russia. Australia responded with a winning spike but Volvich sealed a 25-20 win to double the lead for Russia.

Russia continued to dominate in the third set with Australia trying to respond to the overwhelming attack actions of their opponents. The men coached by Lebedew struggled in offering a consistent defence against the imposing Russian blocks. Thus, Russia made it clear that they would show no mercy. The players around head coach Sergei Shliapnikov kept their early lead and closed the set 25-16 to start their World Championship journey with a comprehensive 3-0 victory.

About the FIVB
The FIVB is the governing body responsible for all forms of volleyball on a global level. Working closely with national federations and private enterprises the FIVB aims to develop volleyball as a major world media and entertainment sport through world-class planning and organization of competitions, marketing and development activities. The FIVB is part of the Olympic Movement, contributing to the success of the Olympic games. 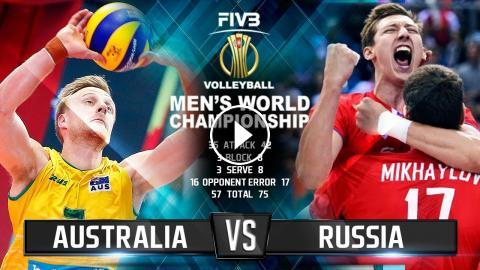 Bari, Italy, September 12, 2018 - The much-anticipated matchup starring Russia and Australia lived up to all expectations with the Russian side able t...