support24
The Undertaker reveals when he was scared in WWE 0:25
Kevin Owens' message to fans 1:10
Tony Khan on who is helping him to book 3:30
Gallows and Anderson moving to Impact Wrestling 4:25
Roman Reigns explains why he is on a hiatus 5:05
Roman Reigns on what he plans to do 5:35
Hulk Hogan vs John Cena almost happened in WWE 6:01
Renee Young’s announcement set for Wednesday 6:55
Sammy Guevara’s suspension and his future in AEW 7:32
Information on WWE Hall of Famers 2020 induction ceremony 8:00
Paul Heyman’s impact behind Lashley's push on RAW 8:22
Vince McMahon beliefs 9:22

The world of wrestling is rather interesting at the moment as AEW and WWE put on regular shows despite the pandemic. With the revelation from Bruce Prichard that Hulk Hogan and John Cena almost had a match in WWE, the Gallows and Anderson move to Impact Wrestling now almost confirmed, and Cody Rhodes addressing Sammy Guevara’s future in AEW following his suspension from the company due to comments addressing Sasha Banks, there’s a lot to talk about at the moment. With this in mind, this is Wrestling Hub, and you are watching the Wrestling Report for 29th June, 2020. 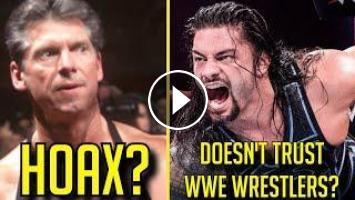 The Undertaker reveals when he was scared in WWE 0:25 Kevin Owens' message to fans 1:10 Tony Khan on who is helping him to book 3:30 Gallows and Ander...