support24
The second episode takes viewers inside three Game 7s from Round Two. It opens in Toronto with Game 5 of the Second Round series between the Tampa Bay Lightning and Boston Bruins. The cameras bring fans into the on-ice action as the Lightning eliminate the Bruins in a 3-2 double-overtime win. While the Lightning await their opponent, head coach Jon Cooper, forward Pat Maroon and his teammates enjoy a relaxing day of fishing and canoeing on Lake Ontario.

“Quest For The Stanley Cup” cameras also capture the inspirational return of Flyers forward Oskar Lindblom to the ice for Game 6 of the Round Two series between Philadelphia and the New York Islanders. From his practice session to the dressing room to the ice, viewers will relive the 24-year old Swede’s first NHL appearance since December 7 when he was diagnosed with a rare form of bone cancer. Lindblom and the Flyers would go on beat the Islanders 5-4 in double overtime to force a Game 7. The episode concludes with the Islanders’ 4-0 shutout win over the Flyers to advance to the Eastern Conference Final for the first time in 27 years.

Episode two shifts to the west, featuring Dallas Stars defenseman Esa Lindell enjoying a fresh haircut with renowned Edmonton barber Craig Boa before the intensity of Game 7 between the Stars and the Colorado Avalanche. Through amazing camera work and mic’d up content, fans will get up close to the players and the coaches on the benches in the Stars’ 5-4 overtime win to advance to the Western Conference Final.

The episode stays in Edmonton to join Vegas Golden Knights forward Mark Stone and his Black Aces teammates while they enjoy another unique bubble service – simulation golf – before their 3-0 shutout win over the Vancouver Canucks in Game 7. Quest cameras catch up with Vegas forward Ryan Reaves soon after his NHL hearing and subsequent one-game suspension for an illegal check to the head, prompting him to miss Game 1 of the Western Conference Final against the Dallas Stars.

Quest For The Stanley Cup premiered in 2016 to critical acclaim, making the NHL the first North American pro sports league to provide unprecedented access to its postseason. For the fifth straight year, the weekly series is produced by Ross Greenburg Productions, under the direction of award-winning producer Ross Greenburg, in association with NHL Original Productions. NHL Chief Content Officer Steve Mayer serves as an executive producer. Emmy and Tony Award-nominated actor Bill Camp returns as narrator.

For the third straight season, ESPN+ subscribers will have access to the entire series throughout the Playoffs, with new episodes available each Wednesday. Fans in Canada will be able to watch Quest For The Stanley Cup every Wednesday evening on YouTube.com/NHL.

For the latest hockey action, subscribe to our channel by clicking the big, red shiny SUBSCRIBE button

Watch live hockey wherever you are: https://www.nhl.com/tv 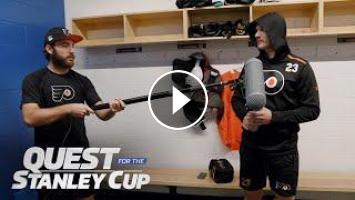 The second episode takes viewers inside three Game 7s from Round Two. It opens in Toronto with Game 5 of the Second Round series between the Tampa Bay...