support24
The 1978 Porsche 935/78 "Mody Dick" and the 2018 New 935 took part in the Goodwood Festival of Speed ​​(FOS) during two different editions, in 2018 and 2019. I wanted to create this virtual comparative video among the cars spaced out 40 years of evolution. The first is a racing model while the second wants to pay homage to the car that inspired it. The original 935/78 represents one of the two built, chassis 935-006. It's usually visible at the Stuttgart museum. Evolution of the group 5 racing model in that year, exploiting a regulatory hole, a very tapered body was made with a long tail. The result was aerodynamics so good that it reached the incredible top speed of 365Km/h on the Hunaudières straight at Le Mans circuit. The supercharged six-cylinder boxer engine was brought to the 3.2-litre displacement, and the power reached 750hp. This car only participated in four races, winning at its debut in the 1978 Silverstone 6 Hours.
The modern 935 tribute was presented in 2018 at the 6th Rennsport Reunion at the Laguna Seca Raceway. The starting base is that of the current 991 GT2 RS, and therefore also the engine remains the powerful 3.8-litre twin-turbo six-cylinder flat that develops 700hp coupled to the seven-speed PDK gearbox. There are many references to the past and to the Porsche world in competitions. In addition to the long tail, of course, the LED rear lights are the same as those of the 919 Hybrid LMP1 race car, the side mirrors come from the 911 RSR, and the titanium tailpipes refer to those of the 908/01 model from 1968 in design. Wheels fairings are another reference to the past of the 935 race cars. Only 77 units will be made.
I have to thank my friends and YouTubers:
➪ 19Bozzy92 (https://www.youtube.com/user/19Bozzy92)
➪ NM2255 (https://www.youtube.com/user/NM2255)
➪ MattyB727 (https://www.youtube.com/user/MattyB727)
With whom I collaborated to realise this video. Enjoy! 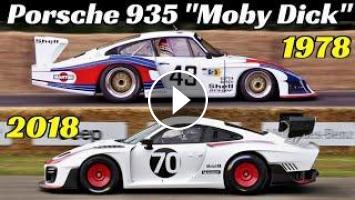