support24
Paul Heyman FIRED From Raw Position? Vince McMahon HAD ENOUGH? Real Reason Paul Heyman WAS RELEASED?
WWE have been releasing a ton of staff to cut back on costs during the global pandemic. WWE brought in Paul Heyman and Eric Bischoff as Executive Directors for Raw and SmackDown almost a year ago. Bischoff was quickly released by the company and replaced by Bruce Prichard. WWE made a massive announcement today, announcing that Paul Heyman will no longer be the executive director of WWE Raw. WWE released a statement saying, “In an effort to streamline our creative writing process for television, we have consolidated both teams from Raw and SmackDown into one group, led by Bruce Prichard. Paul Heyman will concentrate on his role as an in-ring performer.” 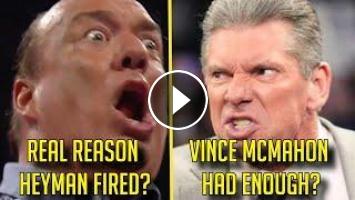