Lube beat Perugia and Made one of the Greatest Moments in Club Volleyball History !!!

ispn
Lube beat Perugia and Made one of the Greatest Moments in Club Volleyball History !!! For the 7th time in club history and 3rd time in a row, Cucine Lube Civitanova took Scudetto, the trophy reserved to the best team in the Italian Volleyball Championship.

However, this was probably the most difficult one and the most unexpected considering injuries of several pillars, including Osmany Juantorena, who didn’t play in the playoffs at all, and other infections the team coached by Gianlorenzo Blengini had to face this season.
But Lube proved to be stronger than everything, first during the regular season, then during the semi-finals of the 2021/22 SuperLega Credem Banca against Itas Trentino in which they trailed 0-2 in the series, and everything was concluded with the most difficult rivals, the regular-season absolute leaders Sir Safety Conad Perugia, who had dominated up to here. But Lube was the one that dominated when needed, up until the ultimate knockout blow at the right moment, in today’s Game 4 of the finals (3-0, partially 25:23, 25:16 and 25:21)

Out of all matches of the final series, Perugia had the last chance in this one tonight, and also in Game 2 at Eurosuole they lost in straight sets.
In Game 4, Perugia were in play only in the opening set when they had 12-9.
All perfect, on the other hand, for the hosts, in front of a sold-out venue with 3,843 fans.

Sir Safety begins with full force with the line-up confirmed, compared to race-3, with Mengozzi still in the center of Perugia. Civitanova, in a sold out building, goes down by three points, 9-12. But with an ace from Zaytsev the comeback of Lube begins, leaning on the wall (3 on Richlicki) overtaking. Grbic brings down the Luxembourgish and puts in Ter Horst. But the trend does not change and the Lube takes the lead, despite two broadsides by Leon in the service. Perugia suffers the blow and sensationally swerves in the second set. Reception no longer supports Giannelli and Grbic’s team falters dangerously. The Lube wall makes the difference and Simon is towering over the net. Zaytsev, after a phantasmagoric first set, falls but at this point it is Simon who makes the difference, as in the first two games. De Cecco distributes at will. while Perugia also stutters at the beginning of the third set. He is only one set from the abyss, in a season that cannot fail to be disappointing, with only one trophy (the Italian Cup) and only two finals reached, with the defeat of the Champions League left on the night of Trento. This is not the right evening for Sir’s colors either. Which also sinks into the third set. Each point a little more. Until the final apotheosis.

Lube beat Perugia and Made one of the Greatest Moments in Club Volleyball History !!! 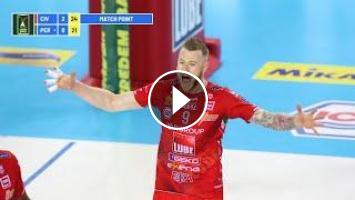 Lube beat Perugia and Made one of the Greatest Moments in Club Volleyball History !!! For the 7th time in club history and 3rd time in a row, Cucine L...