support24
This is the Lola B2K/40S chassis number HU05, one of 15 prototype cars built between 2000 and 2001. It competed in the LMP2 class in the American Le Mans Series and Europe, during the racing season we remembered the 12H Sebring class victory in 2001. In the same year, they have participated in the 24H of Le Mans but had to withdraw due to overheating problems. Recently restored, it took part in the Dix Mille Tours race organized by Peter Auto on the French Paul Ricard circuit in Le Castellet. Lola B2K/40 is competing in the Endurance Racing Legends series again with the original 3-litre naturally aspirated AER Nissan V6 engine that develops about 400hp at 8,500 rpm. The maximum torque is 420Nm at 7,200 rpm. The gearbox is a 6-speed sequential by Hewland. The chassis is an aluminium monocoque with a tubular structure at the rear while the body is made of composite material. Total weight of the prototype is around 750 kg.
I have to thank my friend and Youtuber 19Bozzy92 (https://www.youtube.com/user/19Bozzy92) with whom I collaborated to realise this video. Enjoy! 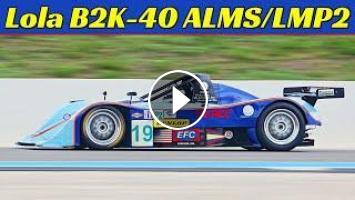