support24
This is the 1971 Ferrari 312 B2, chassis 005, with which Jacky Ickx raced and which saw Clay Regazzoni's winning debut on the Brands Hatch track in a race not valid for the world championship. Its greatest and only success took place the following year, in 1972 when driven by Jacky Ickx, it won the Nürburgring Grand Prix, a race valid for the Formula 1 world championship. Just recently, in 2020 it was exhibited in Paris during the Retromobile fair. I had the pleasure of seeing and filming the 312 B2 in action during the Challenge & GT Days event, which took place at the Red Bull Ring circuit. For the first time, the organizer has decided to dedicate specific track sessions to the historic Formula One single-seaters. The car is equipped with a 3.0-litre naturally aspirated 180 ° V12 engine located in the central-rear position and develops a power of 480hp at 12,500 Rpm. It's moved by a Ferrari type 621 5-speed gearbox and uses four Lockheed disc brakes to stop it. Frame and body are in aluminium, and the overall weight of the car is only 560 kg (1,235 lbs). Enjoy the beautiful sound in the Styrian mountains!
I have to thank my friend and Youtuber @19Bozzy92 with whom I collaborated to realise this video. Enjoy! 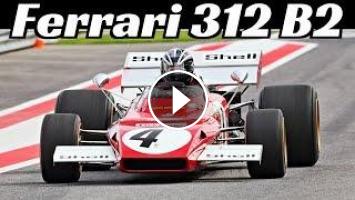 This is the 1971 Ferrari 312 B2, chassis 005, with which Jacky Ickx raced and which saw Clay Regazzoni's winning debut on the Brands Hatch track in a ...