161 Views
support24
All Credits by FIVB:

Yuichi Nakagaichi’s Japan relied on the skills of opposite hitter Issei Otake, but his 11 overall points were not sufficient to pose a threat to the Azzurri. Top scorer with six points for Japan in the last set was Yuki Ishikawa, who has been playing in Italy for the last three seasons.

The inaugural match, set in the scenic Foro Italico in Rome, took off with a symbolic gesture when Azzurri captain Zaytsev handed a limited edition volleyball to the opposing team’s captain Masahiro Yanagida prior to commencing play. Applauses for the President of the Italian Republic Sergio Mattarella who enjoyed the event together with Italian National Olympic Committee President Giovanni Malago and FIVB President Dr Ary S. Graça F°, and many more national and international authorities. In a packed stadium, over 11,000 spectators passionately cheered both the home and guest team. Italy took revenge after having lost to Japan 3-2 in Osaka in the Volleyball Nations League on June 10 of this year.

Italy scored the first point of the match. From then on, it was a neck and neck race, but at the end, Italy closed the set 25-20. Pivotal to the win were Zaytsev and Filippo Lanza who scored six and four points respectively. Best scorer for the Japanese team was Otake.

A more courageous Japan stepped onto the court after the first set, but Italy took home the win 25-21, with a spectacular last point. Juantorena and Daniele Mazzone made the difference, both scoring four points while for Nakagaichi’s team Otake was again top scorer with seven to his name.

Italy struggled in the third set having to face a more aggressive Japan that edged ahead for the first time in the match at 6-4 and kept the advantage until it was surpassed by Blengini’s team at 11-10. The entire stadium stood up at match point, and the crowd roared when the Azzurri closed the third set 25-23 for a perfect start to their World Championship race on home soil. 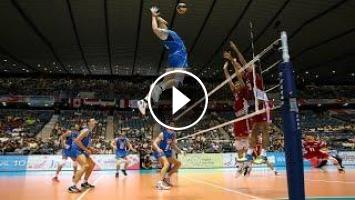