Personal life
Grozer was born in Budapest, Hungary. His father György Grozer Senior is a former volleyball player and coach. With his first wife Violetta he has two daughters - Leana (born 2007) and Loreen (born 2010).

Career
Clubs
He was crowned national champion on two occasions, in 2009 and 2010, while playing for VfB Friedrichshafen. After moving to the Polish league he was Polish champion in his second season (2011/2012) with Asseco Resovia Rzeszów. He then moved to Belgorod where, in the early stages of the season, he played a major role in the team's success in the Russian championship and in the National Cup of Russia. This season he won the Super Cup and the National Cup in Russia, and was crowned the top club team in Europe with Belgorod.[1] In 2017 Grozer back to Russia Super League join to Lokomotiv Novosibirsk.

National team
2011 Grozer could not help the German team because of an injury. In 2012 the dynamic and powerful hitter smashed the German team to the Olympics and to the 5th place in London. In 2014 played at World Championship 2014 help in Poland. Germany won the match for the bronze medal with France.[2] 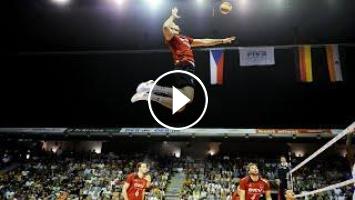