31 Views
support24
Funny Style Serve by Matteo Piano | Craziest Serve in Volleyball History. Matteo Piano, a Volleyball player from Italy, has a really weird and fun style of volleyball serve. His volleyball style serve is indescribable, so we suggest you watch the video and name this way of serve :)

Career
National team
He debuted with the Italy men's national volleyball team in 2013. In 2013 Italy, including Piano, won bronze medal of World League. In the same year he achieved silver medal of European Championship.[1] In 2014 he and his Italian teammates won bronze of World League held in Florence, Italy.[2] He was also part of the team that won the silver medal in the 2016 Summer Olympics and in the 2017 FIVB Volleyball Men's World Grand Champions Cup. 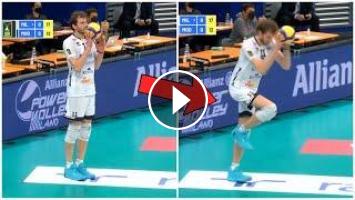