Everyone Thought It Was Over, But Then Something Amazing Happened (HD)

Zhu had an impressive night as she scored 31 of her 33 points from the attack line, then Yuan Xinyue and Gong Xiangyu scored 14 points apiece to lead the Chinese scorers. Nika Daalderop and Celeste Plak also scored big numbers for the Netherlands with 22 and 20 points, respectively.

China have already secured their qualification to the semifinals since their first match win over Brazil on Wednesday, August 2. The Chinese win allowed the defending champions Brazil advance to the semifinals.

he Netherlands held the lead but China made some solid blocks that shifted the momentum to their side, including the block by Gong to seal the opening set win at 25-23. They took alternate set wins in the next three frames for the match to be decided in the tie-breaker. China had a cardiac finish as Zhu’s power plays helped snatch the lead and the match win from the Netherlands.

China coach An Jiajie: We want to thank our fans for their support and we want to thank the Netherlands for giving us tough competition. We’ve faced several difficult situations but we survived this challenging match.

China captain Zhu Ting: We did not do quite well in the early stages of this match but I am happy that we fought hard to snatch the fifth set victory.

Netherlands coach Jamie Morrison: I am happy that my team is going to the right direction. China are a very tough team to face to advance to the semifinal especially they have someone like Zhu Ting who is an amazing player.

Netherlands captain Maret Balkestein-Grotheus: It is hard to describe my feelings right now because I think we could have earned the ticket to the semifinals. However, China had a wonderful performance and fought until the end, when we had a 14-11 advantage. This match was interesting for the spectators as we showed great rallies from both sides.

Everyone Thought It Was Over, But Then Something Amazing Happened (HD) 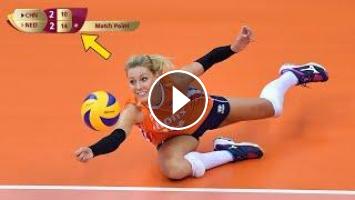