Wilfredo León Venero (born 31 July 1993) is a Cuban-Polish professional volleyball player, a member of Cuba men's national volleyball team in 2007–2012 and current member of Poland men's national volleyball team and Italian club Sir Sicoma Conad Perugia, silver medalist of the World Championship 2010, NORCECA Champion (2009, 2011), Cuban Champion (2009, 2010, 2011), Russian Champion (2015, 2016, 2017). Considered by many as one of a kind he led Cuba to the silver medal at the world championship 2010 in Italy, alongside Yoandi Leal and Robertlandy Simon considered one of the leaders of the "Generation of Miracle" of Cuba volleyball and by many experts, Leon may be one of the best players of all time considering all of the accomplishments he has made while still so young, having won every single title at pro level at the age of 24. 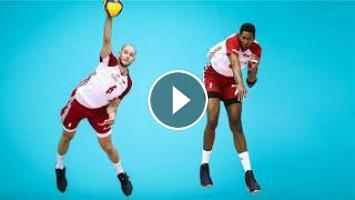