On today’s Transfer Talk, we take a look at the potential exodus facing Arsenal, with Hector Bellerin, Pierre-Emerick Aubameyang and Alexandre Lacazette all potentially leaving the club before the deadline. But with Martin Ødegaard apparently close to joining, it may not be all doom and gloom for fans of the Gunners.

We also take a look at reports claiming that PSG are ready to offer Paul Pogba a contract worth more than half a million pounds a week, while Jesse Lingard could also be on his way back out of Old Trafford, with West Ham still keen to sign him on a permanent basis. Over at rivals Man City, Cristiano Ronaldo has apparently been offered up by agent Jorge Mendes, with an end to the Harry Kane saga seemingly no nearer.

But should Kane join City, then Spurs may enter a bidding war with Atletico Madrid for Fiorentina star Dusan Vlahovic! 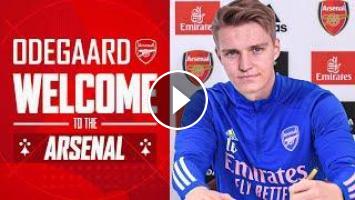 ► SUBSCRIBE to FOOTBALL DAILY: http://bit.ly/fdsubscribe On today’s Transfer Talk, we take a look at the potential exodus facing Arsenal, with Hector ...