support24
Goiania, Brazil, June 3, 2018 - Isac Santos smashed home a dramatic match winning ace as Brazil sensationally came from two sets down to send the USA crashing to their first VNL defeat and seal an epic 3-2 triumph (21-25, 20-25, 25-19, 25-20, 20-18). Wallace was again the leading marksman for the Olympic champions, whacking down 18 spikes, two blocks and an ace to help the Brazilians leapfrog their rivals and move into joint-top place alongside Poland.

Mauricio Silva was also a constant threat with 13 spikes, five blocks and two aces but the Americans will be wondering long into the night how they let this one slip having established such a dominant lead.

Matthew Anderson’s 23 points (22 spikes and an ace) together with sterling efforts from Aaron Russell (16 points) and Thomas Jaeschke (18 points) were the foundations of a typically robust US display, though 40 errors from their side of the net ultimately cost them dear as did having to endure two long, emotional five set matches following their thrilling escape against Japan on Friday.

With news filtering through of Poland’s surprise defeat to Germany, the US knew a straight-sets triumph would be enough to send John Speraw’s team to the top of the VNL heading into the third week of competition.

Yet when the two best sides on the planet lock horns, it’s never straightforward.

The US certainly deserved their two set lead - Anderson was spiking with serious force while Jeffrey Jendryk was a constant in defense.

A packed home crowd certainly loved the opening exchanges although tensions boiled over at 21-19 in the first. A disputed call by the Brazilians was unable to be contested as all the video challenges had been used.

Cue a furious row between Lipe, Wallace - Brazil’s most potent threat once again - and referee Luis Gerardo Macias which resulted in the former receiving a yellow card. Replays showed the call was indeed correct yet the Olympic champions were still furious.

There was more arguing at 24-12 - this time Macias was unsure himself and used the technology but the point went to the US as did the first set.

Coach Sperow urged his side - for whom Anderson had already racked up five spikes and an ace - to target Lipe who was struggling to keep his cool in the red hot heat of battle.

The US , however, just blocked everything out and continued to forge ahead. Wing spiker Thomas Joeschke was getting in on the act, a fearsome spike extended his side’s lead to 15-10 and although Isac was blocking well, Brazil were unable to stop their rivals from doubling their lead.

Ironically it was a Lipe error when he got in Isac’s way which sealed the second set.

Brazil had to improve or risk sliding to their second defeat of the VNL - and so it proved.

The excellent and consistent Wallace - two scorching spikes conjured up two set points which were saved before another hammer finish was sent long by the American defense - was the inspiration but Lipe’s ability to regain his composure was also key.

You could just feel the momentum swinging towards the men in yellow and although the match was very much in the balance at 9-9, once Brazil started to extend their lead thanks to some impressive team cohesion, we were all treated to a box office fifth and decisive set.

At 7-4 , Renan Dal Zotto’s side were looking like favorites to win this epic contest. A huge Anderson block brought it back to 8-6 and that reignited Speraw’s men to edge ahead 11-10 with captain David Smith also bringing his defensive skills to the table.

Patch served hopelessly long at match point and then Jaeschke hit the net. Three match points were saved by Brazil in a breathless ending before a magical stuff block from Wallace gave the home team their first chance to win the match - only for Anderson to save the day once again.

Another match point went begging for Brazil but then Isac sent the Goiania Arena crazy with that final ace. 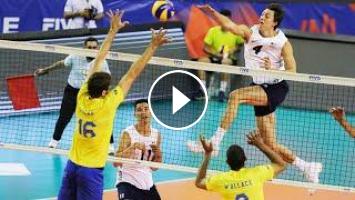