support24
Beautiful and Talented | Tugba Senoglu | Powerful Volleyball Spikes | Women's VNL 2021. Tuğba Şenoğlu (born 2 February 1998) is a Turkish volleyball player. She is 1.84 m (6 ft 1⁄2 in) tall and plays in the wing spiker position for VakıfBank S.K.. She is part of the team which qualified for the postponed 2020 Summer Olympics. Tuğba Şenoğlu was born in Tarsus, Mersin, southern Turkey on 2 February 1998.[1][2] She is a student of Istanbul Aydın University.

Her university team were runners-up at the 2019 European Universities Volleyball Championships held in Łódź, Poland.[3]

She is a member of the Turkey women's volleyball team[2], which qualified for the 2020 Summer Olympics. 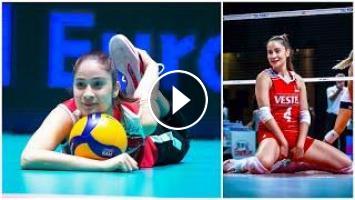