94 Views
Sport24
Yesterday I was lucky enough to record this unique car during "The Lakes GT" trackday. This is the 1982 Porsche 935 JLP-4 built by Fabcar Engineering for the American privateer JLP Racing Team which wanted the fastest Porsche 935 possible for the IMSA Championship. Their request was to build a car that had performance as near as possible to the one of the new GTP cars of those years.

Fabcar's engineer Lee Dykstra in order to create such a thing decided to move away from the tubular space frame chassis found in other 935s and build an aluminium monocoque with a steel tubular frame at the rear to house the engine and suspension. Thanks to the monocoque design Dykstra was able to include ground-effect tunnels. At the front, the rocker-actuated springs and dampers were mounted in-board for a clean airflow through the tunnels. At the rear, wishbones, links and trailing arms were used with the springs mounted on top of the top wishbones.

The car was powered by the latest evolution of the 935 engine, so a 3.2-litre twin-turbocharged flat-6 engine that was able to produce around 840hp with 1.4 bar of turbo pressure.
Much of the development focused on the car's aerodynamics, so the final exterior design bore little resemblance to the road car, with the exception of the roof and the greenhouse.
The car proved several seconds a lap faster than the previous JLP Racing Team's space frame and non ground-effect JLP-3 (quite similar to Kremer's K3).
The Fabcar-built 935 JLP-4 remains as the most sophisticated of all 935s and the only one with full ground-effect aerodynamics.

Unfotunately I wasn't expecting to see such a car at this trackday so there's a bit of lack of track action in this video. If I had known before, I would have done a better and longer video... I'm sorry guys, next time ;)

--- Info and history of this car taken from Ultimatecarpage at this link: http://www.ultimatecarpage.com/car/5927/Porsche-935-JLP-4.html

Link To My Channel: http://www.youtube.com/user/19Bozzy92 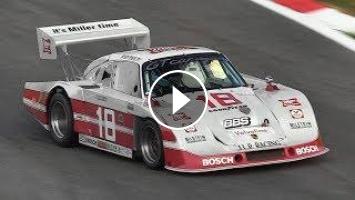 Yesterday I was lucky enough to record this unique car during "The Lakes GT" trackday. This is the 1982 Porsche 935 JLP-4 built by Fabcar En...