46 Views
admin
All Credits by FIVB:

Brazil entered the Finals as the team to beat after claiming a total of 14 wins over the course of the Preliminary Round, losing just once to Serbia in week 3 in Gondomar, Portugal. Poland, on the other hand, won 11 of their 15 matches to end the Preliminary Round in fifth position.

Brazil finished the inaugural edition of the FIVB Volleyball Nations League just behind the USA, in fourth place. Poland were fifth, tied with Serbia.

Yoandy Leal Hidalgo is Brazil's top scorer in the 2019 VNL on 160 points. In the 2018 VNL final round, Wallace De Souza was Brazil's top scorer on 61 points.
· Ricardo Lucarelli Souza's spike success rate of 56.6% was the third-best of all players in the 2019 preliminary round.
· Thales Hoss led all players in the preliminary round on a 25.98% efficiency as best receiver. Poland's best receiver was Bartosz Kwolek on 11.67%. 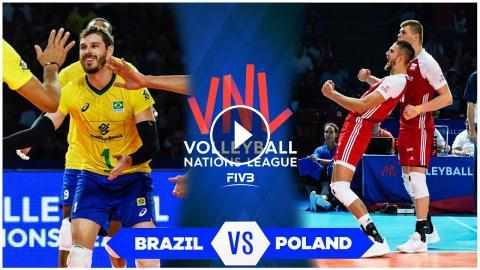